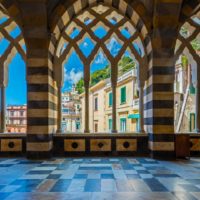 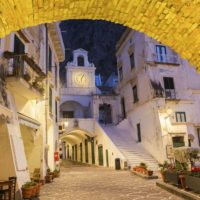 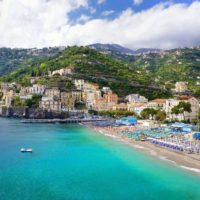 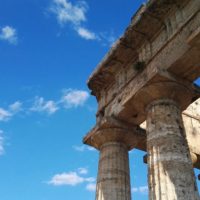 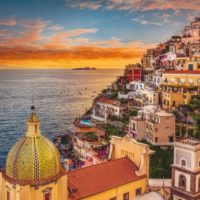 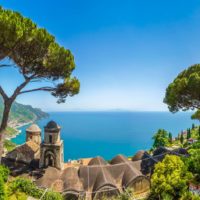 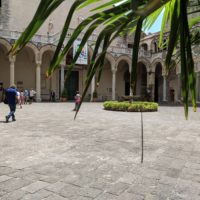 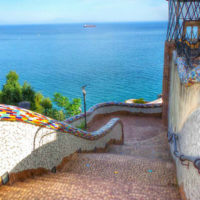 Despite the earthquake of 1343 having wiped out most of the old city, Amalfi is a city that exudes history and culture.

A symbolic place on the Amalfi Coast, the oldest maritime republic still enchants today as it did at the time of the Grand Tour, especially thanks to the beauty of its cathedral with Byzantine influences, the Paper Museum, the hiking trails.

Positioned at the outlet of the romantic Valle dei Mulini, Amalfi as well as nearby Positano, overlooks the sea gently with the characteristic agglomeration of houses clinging to the rock, narrow streets and alleys full of craft shops in just over 3 square km.

Don’t miss the opportunity to spend a day of trekking at the Valle delle Ferriere and Valle dei Mulini.

The monumental complex of the Amalfi Cathedral is made up of several independent but connected bodies.

The oldest element of the complex is the Basilica of SS. Crucifix, built before the year 833 and is a clear reflection of the past of the 11th century maritime superpower. The Basilica today acts as a museum.

Next to it, in 987, the current Cathedral was built, built next to the Basilica of the Crucifix, to which it remained interconnected for a long time, giving life to a single majestic metropolitan cathedral with six naves, then divided into two churches in the Baroque era.

The striped facade was rebuilt twice, recently in the late 19th century.

Other two elements, the Campanile and the Crypt, were built in 1180 and 1206 respectively.

Atrani is one of the smallest cities in Italy and is the only municipality on the Amalfi Coast to have preserved the typical original appearance of a fishing village intact.

The square was originally created as a shelter area for boats on stormy days, today it is a quiet meeting place to sip a good coffee or a glass of wine looking at the sea.

A maze of small alleys starts from the square leading to the upper part of the village, from which you can enjoy a natural panorama with breathtaking colors.

The sea that embraces the small beach of Atrani, especially in the warm colors of the sunset, is a show not to be missed for those who decide to spend a few days on the Amalfi Coast.

Over the years, Atrani has become a meeting point for young and old. The town, built in a hollow on the Amalfi Coast, is protected from the noise and traffic of nearby towns.